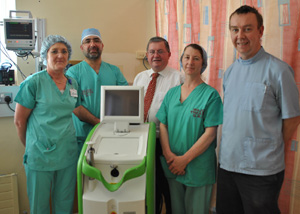 A pioneering technique to treat prostate enlargement as a day case procedure has been developed in Galway University Hospitals. Lorraine O’Hanlon reports.

A pioneering technique to treat prostate enlargement as a day case procedure has been developed in Galway University Hospitals. Lorraine O’Hanlon reports. The most common problem of the prostate is prostate enlargement called Benign Prostatic Hyperplasia (BPH). This is a benign (noncancerous) condition where the prostate gets bigger gradually after the age of about 50.

By the age of 70, about eight in ten men have an enlarged prostate. Passing urine frequently day or night, urgency, poor flow, stop and start flow, straining and feeling of incomplete emptying of the bladder can be symptoms of BPH. If these symptoms are left untreated, it can ultimately lead to complications like retention of urine, failure of bladder to contract, stones and renal failure. BPH can be initially treated with medicines depending on the severity of the disease, ultimately most of the patients with symptomatic bladder outlet obstruction have to have surgery to relieve the obstruction.

The new treatment developed in Galway University Hospitals involves surgery using a special laser to carry out photosensitive vaporisation of the prostate, known as PVP. Laser PVP is one of the very successful and latest developments in treating such patients.

The technique, which was pioneered in Ireland by Mr Syed Jaffry, Consultant Urological Surgeon, means that patients can be treated during the day, do not need to be admitted to hospital, and their recovery time is much quicker. “The laser treatment is minimally invasive and provides immediate symptom relief with minimal side effects. The procedure usually takes 20 to 40 minutes and patients are able to go home the same day,” says Mr Jaffry.

“By comparison, the traditional surgery methods could require a three to seven day stay in hospital and may involve occasional blood transfusions. Some medicines like Asprin. Warfarin and Plavix have to be stopped in the traditional procedure while with laser we can continue these medicines if needed, with some adjustments,” he says.

Mr Jaffry adds that laser surgery to the prostate also reduces the risk of infection and it is more convenient for the patient, who does not have to be away from home and can return to work more quickly afterwards. “In addition, the cost of a laser procedure is much less than traditional surgery and the outcomes are the same which means greater value for the tax payer,” he says.

The consultant urological surgeon developed the laser technique initially in the Galway Clinic in 2005 and he says that his primary motivation for introducing this technique at Galway University Hospitals as a day case was the benefit of laser treatment for patients.

“Instead of surgery with a hospital stay, most of my patients are able to go home the same day, their symptoms are relieved right away and the risk of side effects are lower,” he says. “This also means that patients who were not suitable for the traditional prostate operation can now have the laser procedure due to its low side effects and high safety profile. I am thankful to my colleagues in the Department, notably the Head of the Urological Department, Mr Michael Corcoran for his guidance and support along with the theatre team.”